View the images and pictures on the Black Awareness Ribbon Pinterest Board.

Posted by DonnaBellas at 8:45 PM No comments:

Genes and environment in Schizophrenia

Scientists have long known that schizophrenia runs in families. The illness occurs in 1 percent of the general population, but it occurs in 10 percent of people who have a first-degree relative with the disorder, such as a parent, brother, or sister. People who have second-degree relatives (aunts, uncles, grandparents, or cousins) with the disease also develop schizophrenia more often than the general population. The risk is highest for an identical twin of a person with schizophrenia. He or she has a 40 to 65 percent chance of developing the disorder.
We inherit our genes from both parents. Scientists believe several genes are associated with an increased risk of schizophrenia, but that no gene causes the disease by itself. In fact, recent research has found that people with schizophrenia tend to have higher rates of rare genetic mutations. These genetic differences involve hundreds of different genes and probably disrupt brain development.
Other recent studies suggest that schizophrenia may result in part when a certain gene that is key to making important brain chemicals malfunctions. This problem may affect the part of the brain involved in developing higher functioning skills. Research into this gene is ongoing, so it is not yet possible to use the genetic information to predict who will develop the disease.
Despite this, tests that scan a person's genes can be bought without a prescription or a health professional's advice. Ads for the tests suggest that with a saliva sample, a company can determine if a client is at risk for developing specific diseases, including schizophrenia. However, scientists don't yet know all of the gene variations that contribute to schizophrenia. Those that are known raise the risk only by very small amounts. Therefore, these "genome scans" are unlikely to provide a complete picture of a person's risk for developing a mental disorder like schizophrenia.
In addition, it probably takes more than genes to cause the disorder. Scientists think interactions between genes and the environment are necessary for schizophrenia to develop. Many environmental factors may be involved, such as exposure to viruses or malnutrition before birth, problems during birth, and other not yet known psychosocial factors.

Scientists think that an imbalance in the complex, interrelated chemical reactions of the brain involving the neurotransmitters dopamine and glutamate, and possibly others, plays a role in schizophrenia. Neurotransmitters are substances that allow brain cells to communicate with each other. Scientists are learning more about brain chemistry and its link to schizophrenia.
Also, in small ways the brains of people with schizophrenia look different than those of healthy people. For example, fluid-filled cavities at the center of the brain, called ventricles, are larger in some people with schizophrenia. The brains of people with the illness also tend to have less gray matter, and some areas of the brain may have less or more activity.
Studies of brain tissue after death also have revealed differences in the brains of people with schizophrenia. Scientists found small changes in the distribution or characteristics of brain cells that likely occurred before birth. Some experts think problems during brain development before birth may lead to faulty connections. The problem may not show up in a person until puberty. The brain undergoes major changes during puberty, and these changes could trigger psychotic symptoms. Scientists have learned a lot about schizophrenia, but more research is needed to help explain how it develops.

Who Is At Risk?

About 1% of Americans have this illness.
Schizophrenia affects men and women equally. It occurs at similar rates in all ethnic groups around the world. Symptoms such as hallucinations and delusions usually start between ages 16 and 30. Men tend to experience symptoms a little earlier than women. Most of the time, people do not get schizophrenia after age 45. Schizophrenia rarely occurs in children, but awareness of childhood-onset schizophrenia is increasing.
It can be difficult to diagnose schizophrenia in teens. This is because the first signs can include a change of friends, a drop in grades, sleep problems, and irritability—behaviors that are common among teens. A combination of factors can predict schizophrenia in up to 80% of youth who are at high risk of developing the illness. These factors include isolating oneself and withdrawing from others, an increase in unusual thoughts and suspicions, and a family history of psychosis. In young people who develop the disease, this stage of the disorder is called the "prodromal" period.

Positive symptoms are psychotic behaviors not seen in healthy people. People with positive symptoms often "lose touch" with reality. These symptoms can come and go. Sometimes they are severe and at other times hardly noticeable, depending on whether the individual is receiving treatment. They include the following:
Hallucinations are things a person sees, hears, smells, or feels that no one else can see, hear, smell, or feel. "Voices" are the most common type of hallucination in schizophrenia. Many people with the disorder hear voices. The voices may talk to the person about his or her behavior, order the person to do things, or warn the person of danger. Sometimes the voices talk to each other. People with schizophrenia may hear voices for a long time before family and friends notice the problem.
Other types of hallucinations include seeing people or objects that are not there, smelling odors that no one else detects, and feeling things like invisible fingers touching their bodies when no one is near.
Delusions are false beliefs that are not part of the person's culture and do not change. The person believes delusions even after other people prove that the beliefs are not true or logical. People with schizophrenia can have delusions that seem bizarre, such as believing that neighbors can control their behavior with magnetic waves. They may also believe that people on television are directing special messages to them, or that radio stations are broadcasting their thoughts aloud to others. Sometimes they believe they are someone else, such as a famous historical figure. They may have paranoid delusions and believe that others are trying to harm them, such as by cheating, harassing, poisoning, spying on, or plotting against them or the people they care about. These beliefs are called "delusions of persecution."

Thought disorders are unusual or dysfunctional ways of thinking. One form of thought disorder is called "disorganized thinking." This is when a person has trouble organizing his or her thoughts or connecting them logically. They may talk in a garbled way that is hard to understand. Another form is called "thought blocking." This is when a person stops speaking abruptly in the middle of a thought. When asked why he or she stopped talking, the person may say that it felt as if the thought had been taken out of his or her head. Finally, a person with a thought disorder might make up meaningless words, or "neologisms."
Movement disorders may appear as agitated body movements. A person with a movement disorder may repeat certain motions over and over. In the other extreme, a person may become catatonic. Catatonia is a state in which a person does not move and does not respond to others. Catatonia is rare today, but it was more common when treatment for schizophrenia was not available.
Negative symptoms
Negative symptoms are associated with disruptions to normal emotions and behaviors. These symptoms are harder to recognize as part of the disorder and can be mistaken for depression or other conditions. These symptoms include the following:
·         "Flat affect" (a person's face does not move or he or she talks in a dull or monotonous voice)
·         Lack of pleasure in everyday life
·         Lack of ability to begin and sustain planned activities
·         Speaking little, even when forced to interact.
People with negative symptoms need help with everyday tasks. They often neglect basic personal hygiene. This may make them seem lazy or unwilling to help themselves, but the problems are symptoms caused by the schizophrenia.
Cognitive symptoms
Cognitive symptoms are subtle. Like negative symptoms, cognitive symptoms may be difficult to recognize as part of the disorder. Often, they are detected only when other tests are performed. Cognitive symptoms include the following:
·         Poor "executive functioning" (the ability to understand information and use it to make decisions)
·         Trouble focusing or paying attention
·         Problems with "working memory" (the ability to use information immediately after learning it).
Cognitive symptoms often make it hard to lead a normal life and earn a living. They can cause great emotional distress.


View the images and pictures on the Silver Awareness Ribbon Pinterest Board.

Posted by DonnaBellas at 9:53 AM No comments:


View the images and pictures on the White Awareness Ribbon Pinterest Board. 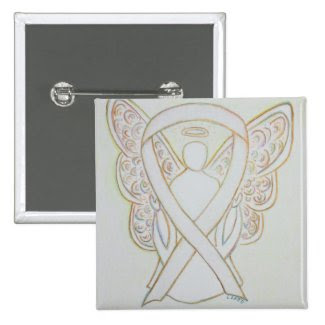 Posted by DonnaBellas at 3:17 PM No comments: